BE SURE TO VISIT THESE HORSES DAILY:

*Defrost a FROST*
for a chance to win a
Hypnos Blanket.

If LovelyHorseLover sees this on your page, you could win a BMI!
(*Hint - she checks her congratulations!)

Pixie1k is having a lottery contest.
Visit their page for more details.

yougurt is having a giveaway contest.
Visit their page for more details. 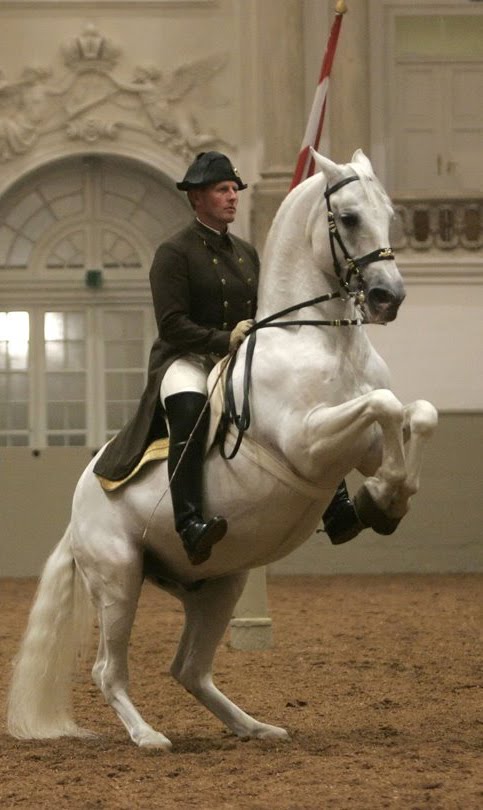 I am a loyal fan of the Lipizzaner breed and am working hard to acquire and breed quality Lipizzaners here.
I will be updating my presentation from time to time. Come back soon to see what's new!

Please feel free to visit my Breeding Farms and visit with the horses! They are very gentle and would appreciate an apple when you stop by.

The development of the Lipizzaners is attributed to the House of Hapsburg,
& also to the Austro-Hungarian Empire.
The imperial stud farm at Lipizza was founded in 1580 by Charles II, one of
the brothers of the Roman monarch Maximillian II.
Back then, the use of Spanish horses
in the European courts was already an established trend. Historical records suggest that 24 mares and 9 stallions were brought from Spain in 1580.
More horses of Spanish origin were regularly imported to the stud until
the 18th century. From the year 1700,
the stud started purchasing German,
Italian, and Danish horses.
The breed got its name from the place where the Imperial stud was located (in the village of Lipizza).
Prior to that, the Lipizzaner was known as the “Spanish Karst” or “Karst” horse. During the late 18th-century as well as the early 19th-century, the French military leader Napoleon led his army into Italy and was involved in a series of conflicts.
As a result, the royal stud farms were evacuated. The stable buildings were
badly damaged because of an earthquake in 1802. Moreover, most of the documents with breeding information were ruined by the French armies. However, the breed somehow endured these hardships and its population expanded throughout Eastern Europe.
The breeding program of these Lipizzaners was severely affected when Italy joined World War I in 1915. Following a royal decree, the stud farm was taken out of Lipizza. While the breeding horses went to Laxenburg in Austria, the remaining horses were placed at Kladrub in Bohemia.
After the conclusion of World War I,
37 young mares from Kladrub were seized by the government of Czechoslovakia. The remaining mare lines in Laxenburg were divided between Italy and Austria. Shortly after the war, the white stallions were allowed to participate in public performances at the Spanish Riding School.
The Lipizzan horses were also
affected by World War II. Between 1941-1945, all the horses from the Piber stud, the Yugoslav stud farms, the Lipizza stud, and the private studs were moved to a stud farm at Hostau.
In April 1945, the Eighth United States Army headed by General George Patton secretly took over this stud farm. A surprising move from Colonel Charles Reed, of the 2nd Cavalry Regiment, saved the Lipizzaners. Some of the horses were moved to German farms or brought to the United States, while those taken from Lipizza were transferred back to Italy. Around 215 Austrian Lipizzaners were taken back to Piber in 1952.
Interesting Facts:

The movements performed by the Lipizzaner horses include:

The rescue of the stallions during
World War II is represented in the
film "Miracle of the White Stallions".

Click here for a complete description
of the "Airs Above Ground".

The Lipizzaner stallions perform the
"Airs above ground" a series of higher level classical dressage  movements that involve the horse leaving the ground.

These movements are unique to classical dressage and are not typically seen in modern
competitive dressage.
~ The Levade ~

The Levade dates back to the beginning of the 20th Century and requires that the horse maintain a position around 30 to 35 degrees off the ground. This low angle makes the position very strenuous and difficult to hold, requiring a great deal of effort from the horse. Few horses can perform the Levade to a good standard since it requires a high degree of control, exceptional balance and strength.
A horse will be required to enter the Levade from the Piaffe, another dressage movement in which the horse is in a very controlled trot on the spot, or nearly on the spot. The horse transfers its weight to its back legs, tucking its hindquarters and coiling its loins. This difficult position is maintained for a few seconds before the horse puts its forelegs back on the ground.
~ The Courbette ~

To perform the Courbette, the horse will raise its forequarters off the ground and tuck up its forelegs before jumping forward in a number of hops. The forelegs are not allowed to touch the ground and the move is therefore very demanding. Horses with exceptional strength and talent can perform as many as five leaps, some more, before they need to touch their forelegs down. Most horses will perform just three or four.
~ Capriole, Croupade & Ballotade ~

To perform the Capriole, the horse will jump from a raised position where the forequarters are straight up in the air.
The horse kicks out its hind legs then lands on all four legs, at the same time or almost. As for many of the other movements, a great deal of power is required to perform these moves correctly – and it is considered the most challenging of all airs above the ground.
The Croupade is a similar move that horses are taught first. In this move, the horse will not kick out at the height of elevation; instead, they will keep their hind legs tucked underneath and remain parallel to the ground.
After learning the Croupade, the horse will then be taught the Ballotade. In this move, the horse positions its hind hooves so its shoes can be seen if watched from behind. The horse does not, however, kick out. Once the horse has mastered the Ballotade, they will then be taught the Capriole.
The moves performed by the horses are similar to those seen through the years in the military which date back to Ancient Greece. In post-medieval times, knights would attempt to establish superiority on the battlefield by getting rid of their heavy armor and performing complex fast maneuvers that succeeded, even on a battlefield dominated by firearms.

Lipizzaners are a muscular breed of horse that are usually grey, although there are a few rare solid color horses that are black or bay.
The horses have black skin with dark eyes and are born with a bay or black coat. Their coat will usually become lighter as they age, the whole process taking between six to ten years, before they develop a white hair coat.

They are not truly white; this is something of a misconception, as a white horse by definition would be born white with unpigmented skin.
There used to be more coat color variety among the breed until the 18th Century. Lipizzaners could be black, chestnut, piebald, skewbald, dun or bay.

Grey was the dominant gene,
and the color that the Royal family preferred, so the other colors have mostly died out through breeding practices. However, it is a long standing tradition continued to the present day that the Spanish Riding School keeps at least one bay Lipizzaner stallion. 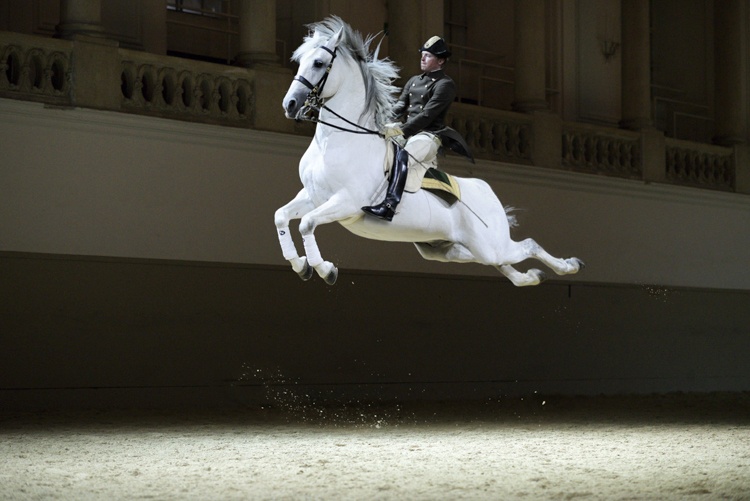 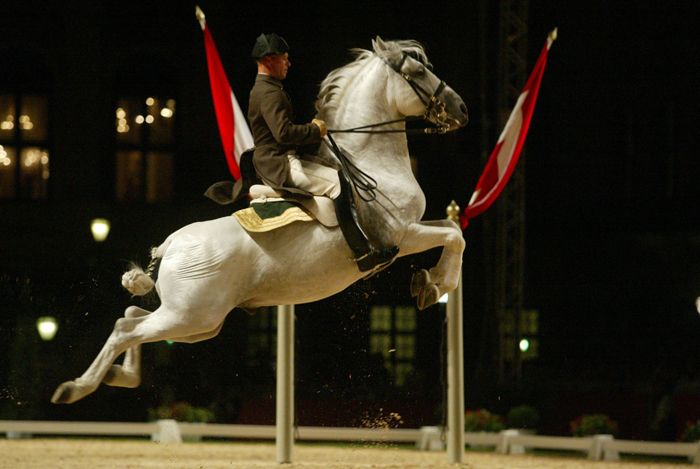 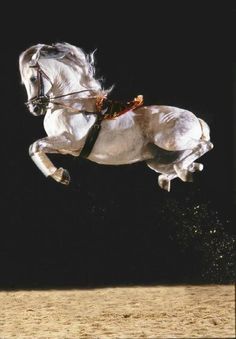 Proud charter member & co-founder of
the "Coast to Coast" Lipizzaner team.
Come check us out! 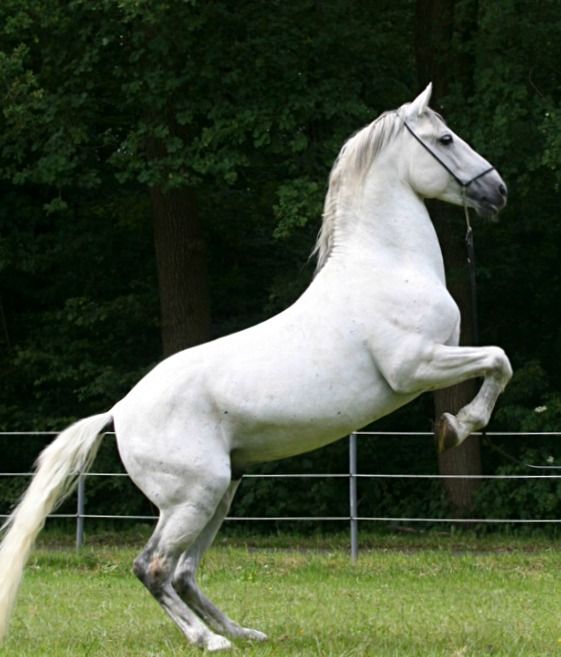 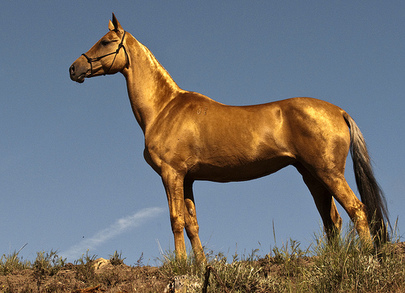 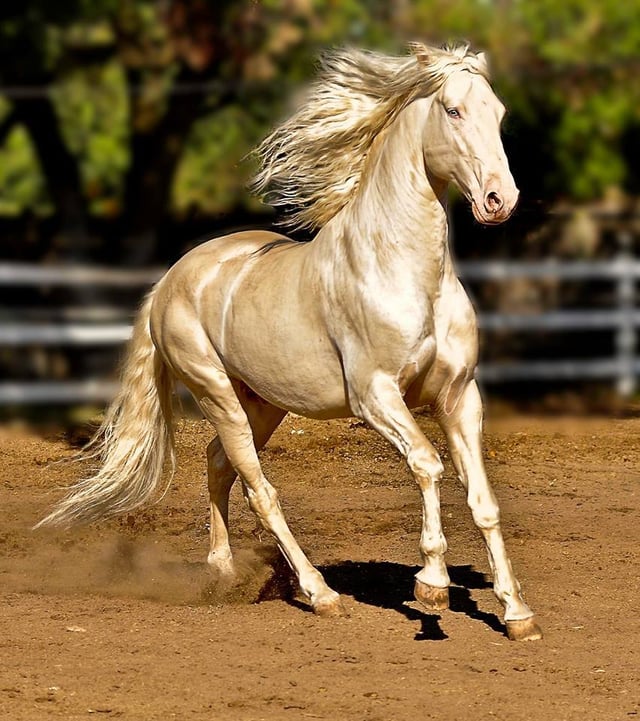 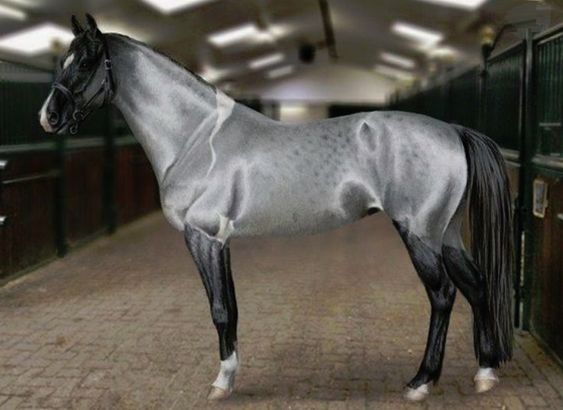 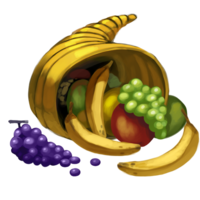 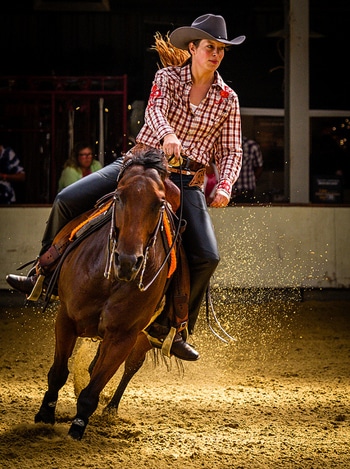 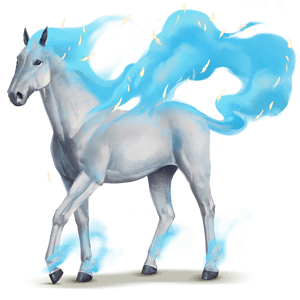 In memory of Eight Belles 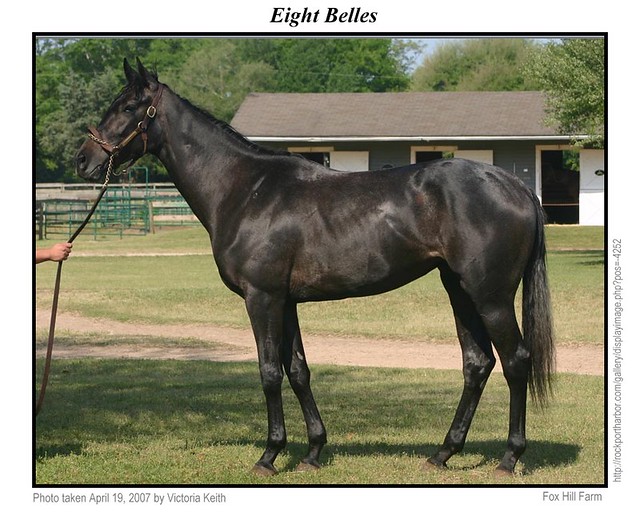 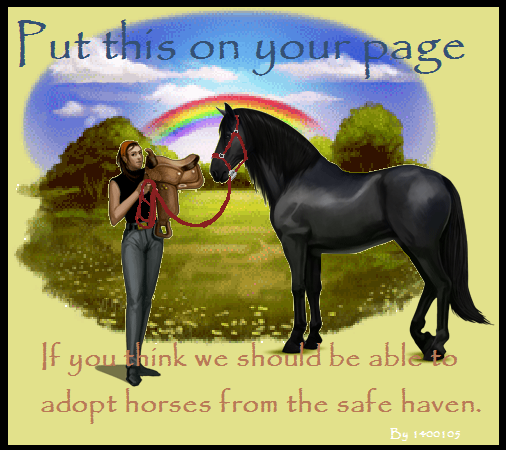 All friend requests accepted,
but players must remain active
to remain on my friends list.